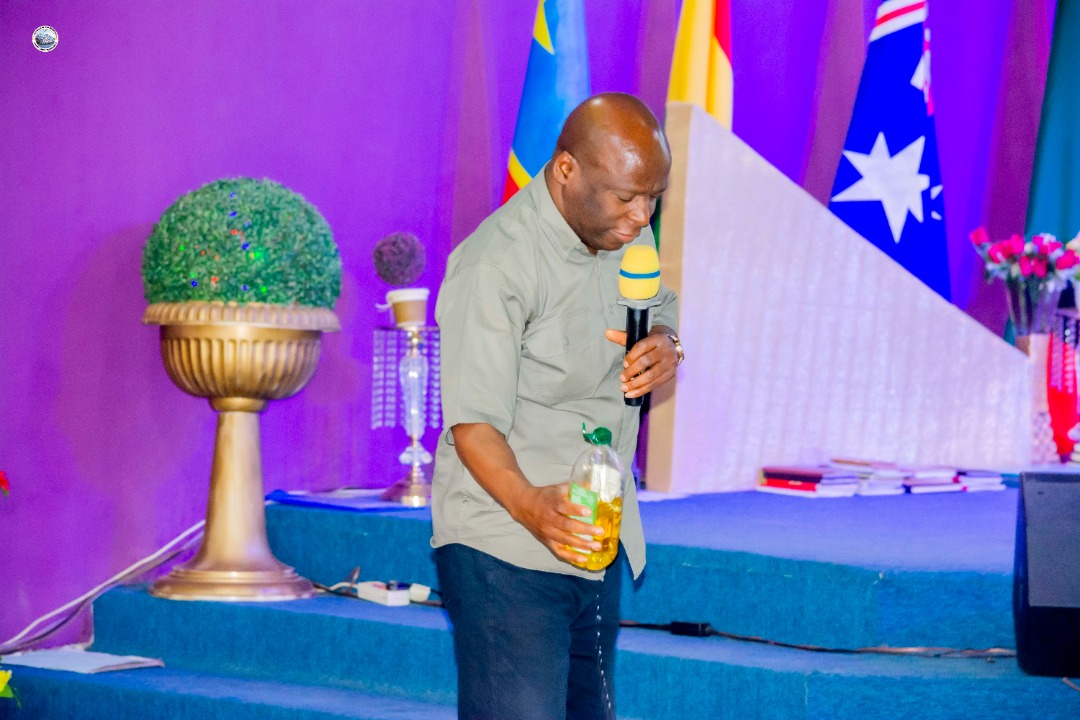 ⭕️Some people are just existing instead of living, because the powers of the land have taken out the zeal for them to pursue their dreams.

⭕️Forces of containment keep you within a certain limit, making you to conform to the standards which they have set for society.

⭕️Look at what God has told you and not at what the circumstances are telling you.

⭕️It is at the stage where a person’s circumstances contradict the vision given to them by God that they can meet Satan who can discourage them.

⭕️As long as God is in the race with you, you have His help (grace).

⭕️The devils will be the first to fight the word of God over your life, by making you the very opposite of what God said you would be.

⭕️How many people get discouraged at the point where their breakthrough is about to happen?

⭕️A wrong voice will cause you to make a stupid decision.

⭕️Don’t expect everyone to believe in your vision, even Joseph’s brothers didn’t believe in his vision and conspired against him.

⭕️Stand out! Keep talking about your vision.

⭕️As a leader, your aim should not be to please the people but God.

⭕️Your reactions to circumstances will reveal to you how humble or proud you are.

⭕️Be careful with people who talk to you when you are in your waiting season, some could be messengers of the devil sent to sway you as you are waiting on the Lord.

⭕️When devils react to something you’re doing; it is a sign that you’re on the right path. So go full throttle with the action they’re trying to stop you from doing.

⭕️No matter what is happening around your life, make sure God is still with you.

⭕️Any killing that happens in the physical realm already took place in the spiritual realm.

⭕️In the physical realm, Saul’s cause of death would have been reported as suicide, but in the spiritual realm, Saul died because God killed him.

⭕️You might have a medical report for an issue you’re facing, but do you have a spiritual report?

⭕️IN THE NAME OF JESUS, THE POWERS OF THE LAND THAT SABOTAGE AND DESTROY DESTINIES, AS I SPEAK, THOSE POWERS ARE PARALYZED.

⭕️IN THE NAME ABOVE EVERY NAME, I DECREE AND DECLARE THAT THEIR AGENDA TOWARDS YOU AND ME IS FRUSTRATED.

⭕️MAY GOD SHOW YOU AND ME MERCY.

⭕️LET ANY POWER THAT WANTS TO DISGRACE YOU OR MOVE YOU FROM THE POSITION WHERE YOU’VE BEEN WAITING FOR GOD, BE DISGRACED.

⭕️YOUR FEET WILL NOT TAKE YOU TO A WRONG PLACE.

⭕️OH GOD OF HEAVEN, HAVE MERCY UPON US AND OUR FELLOW MOUNTAINITES.

⭕️I DECREE AND DECLARE, FATHER, GOD OF ALL SPIRITS, LET THE BLOOD OF JESUS, BY REASON OF HAVING BEEN POURED TO THE GROUND, RELOCATE THE FEET OF EVERY MOUNTAINITE THAT IS IN A WRONG PLACE.

⭕️I DECREE THAT WHERE THERE IS A GARMENT OF SORROW AND SADNESS, RELOCATE THEM TO A PLACE OF JOY.

⭕️FATHER, NO MATTER THE PLAN OF THE WICKED, BY THIS PLAN OF MERCY, LET THEIR PLAN BE FRUSTRATED.

⭕️FATHER, I KNOW YOU ALWAYS HEAR ME FOR I SPEAK NOT IN MY NAME BUT IN THE NAME OF JESUS.

⭕️THIS DAY, THE LAST DAY OF SEPTEMBER, YOU SAID, “GOD HAS REMEMBERED ME.” LORD, BY YOUR MERCY LET THERE BE A SPIRITUAL RELOCATION.

⭕️LORD, AS I POUR THIS OIL ON THE GROUND LET THERE BE A SPIRITUAL RELOCATION.

⭕️FATHER, I DECREE, LET THE ZERUBABELS OF FINANCIAL DOMINION, REAL ESTATE, AND OF DIFFERENT FIELDS ARISE AND BUILD IN THE NAME OF JESUS.

⭕️WHATEVER STOPPED IN THE LIFE OF ANY MOUNTAINITE, LET THERE BE A START BY REASON OF SPIRITUAL RELOCATION.

⭕️BY REASON OF THIS OIL THAT IS CALLING ON THE BLOOD OF JESUS TO SHOW MERCY, LET THERE BE A SPIRITUAL RELOCATION.

⭕️I DECREE AND DECLARE, BY THIS SAME ACT, LET THERE BE A SPIRITUAL RELOCATION OF RESOURCES.

⭕️BY SPIRITUAL RELOCATION, THEY ARE COLLIDING WITH THEIR FAVOR.

⭕️NO MATTER THEIR ASSOCIATION, THEIR AGENDA IS FRUSTRATED.

⭕️I DECREE TO THE NORTH, SOUTH, EAST AND WEST, MONEY COMETH TO THIS CHURCH AND TO MOUNTAINITES.

⭕️FAVOR AND BREAKTHROUGH COMETH TO MOUNTAINITES IN THE NAME OF JESUS.

⭕️I SEE A TURNAROUND! I SEE SPIRITUAL RELOCATION IN THE NAME OF JESUS!

⭕️I SEE POWER CHANGING HANDS, POWER COMING IN THE HANDS OF MOUNTAINITES IN THE NAME OF JESUS.

⭕️THAT AFFLICTION WAS MEANT TO CONDITION YOU FOR A MAJOR SATANIC ATTACK, BUT BY THIS ACT YOU ARE DELIVERED.

⭕️I DECREE AND DECLARE, WHATEVER NEEDS TO TURN ON THIS LAST DAY OF SEPTEMBER, LET IT TURN!

⭕️MIND-BOGGLING TESTIMONIES ARE ACCOMPANYING US.

⭕️WHAT HAS NEVER ENTERED OUR LIVES IS ENTERING.

⭕️THOSE POWERS FROM OUR BLOODLINE ARE PERMANENTLY FRUSTRATED.

⭕️THE GRACE TO TAKE OVER IS UPON US.

⭕️I DECLARE THAT THIS IS TO YOU AND ME, A VERY SPECIAL GOOD FRIDAY, IN THE NAME OF JESUS.

⭕️WE DECREE AND DECLARE THAT ON THIS LAST DAY, GOOD THINGS HAVE BEEN RELEASED IN THE CAMPS OF MOUNTAINITES.

One Reply to “LIFE IS SPIRITUAL”